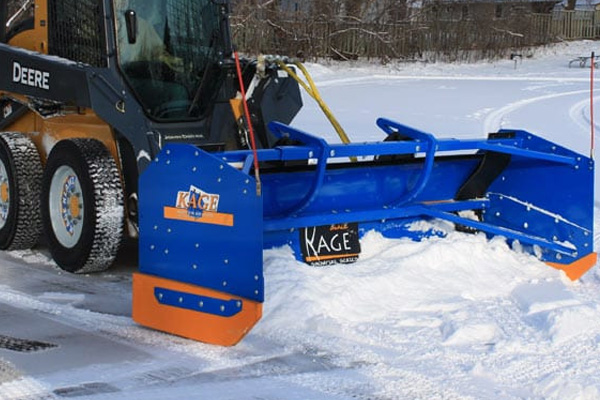 The KAGE® Snowfire Snow Plow Box System for skid steers and compact wheel loaders has a revolutionary design that is built to withstand the rigors of commercial snow plowing. This patented 2-in-1 system allows the operator to switch between angle plowing, back dragging, and pushing the snow. Simply and seamlessly transition from angle plowing to snow pushing…. all within seconds and from the cab! That is the KAGE advantage! - Less

The KAGE® Snowfire Snow Plow Box System for skid steers and compact wheel loaders has a revolutionary design that is built to withstand the rigors of commercial snow plowing. This patented 2-in-1 system allows the operator to switch between angle plowing, back dragging, and pushing the snow. Simply and seamlessly trans... + Read More

The SNOWKAGE box hooks onto a skid steer snow plow to instantly create a revolutionary containment system. This is done in seconds without leaving the cab – no pins, bolts, or hinges. The KAGE system takes the advantages of a snow plow and a pusher box and combines them into one fast and seamless operation. Operators can windrow or backdrag with the plow normally, then grab the SNOWKAGE box to push out their piles or windrows. Then they can go back to plowing – without leaving the cab. The KAGE system reduces plowing frustrations and hassles. The KAGE system reduces plowing times by 25-50%.

With the KAGE box attached, the trip edge mechanism of the plow still operates normally. Not only does the trip edge work normally, but so does the cutting edge! The scraping ability of the plow is not hindered by the ‘shoes’ of the SNOWKAGE. This means that you are always scraping down to asphalt in one pass.

Use the angle function of the plow while you are pushing. This means that you have a huge advantage over fixed snow pushers in that you can maneuver the load around turns without losing half of it!

The KAGE system is great for cleanup operations, as well as break-out during a heavy snow fall. The applications for the KAGE system combined with the skid steer versatility are virtually endless. In contrast, fixed snow pushers reduce skid steer efficiency and versatility. The normally wide range of sites that skid steers can be used at is greatly diminished, and little things like cleanup along curbs becomes a chore. When KAGE box is dropped off, there is no change to the performance of the snow plow. Can it stack snow? Why yes, of course. In fact it will stack higher and faster than a pusher or bucket because you have more reach and don’t have to ‘dump’!

The KAGE Moldboard has a plow structure like no other in its class. The full length Tri-Formed Box structure gives it the most torque resistance and rigidity. Designs like this have been used in the highway plows for years. We take skid steer plowing seriously. Even the moldboard sheet itself is no run-of-the-mill mild steel. No this is 10ga GRADE 50, which among other things has a higher tensile strength, meaning it is harder to dent and tear, prolonging the life of the finish and plow itself.

Powder Coated Snow Plow Blade Baked on powder coat and primer at 400+ degrees safeguards all of the steel components, and keeps the Blade looking great for years. We don’t like the look of rust streaks or deteriorating pockets of corrosion, and we guess neither do you, so we eliminate all of that through a proprietary method of applying seam sealer to all un-welded joints prior to the finish getting baked on. This substantially increases the life of the entire finish and overall long lasting quality appearance. Not to mention our two-tone powder process that gives you the striking KAGE Blue and black combination, signifying Lasting KAGE Quality.

The Blade features a tall, 9″ safety trip-edge standard. This prevents accidental damage when encountering hidden obstacles by tripping back 68 degrees. Powered by four compression style return springs and pivoting on 7 total 1 inch trip pins, it trips when you need it, and stays put when you don’t.

Snow Plow Down PressureDown pressure? Bring it on! Trip edges like this are meant to take the abuse so common to skid steer plowing.

The Attack Angle is an aggressive 65 degrees so that it scrapes cleanly – forward and backwards. Mounted onto the trip edge is a High Carbon steel cutting edge, 6 inches tall, 5/8 inches thick.

Our cutting edges are also a result of the highway department standards, and will fit up with any ‘standard highway punch’ design, available almost anywhere. No-one wants more downtime, so just replace the edge as needed – no need to move, rotate, flip or flop!

Angle plowing with a skid steer at low speed? Absolutely! No question that this is efficient, and it’s made even better with the severe 35 degree max angle that the plow can achieve. This is more productive and efficient than plowing with trucks in many situations!