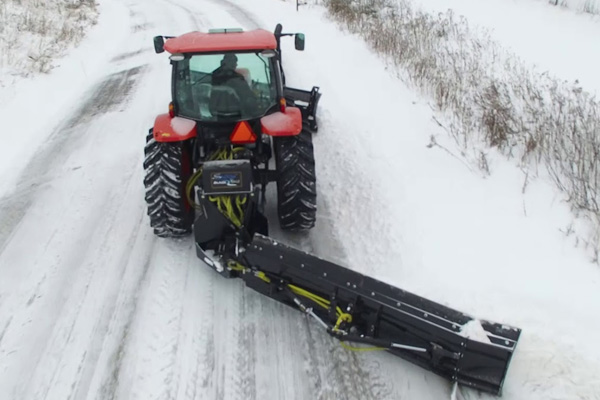 The KAGE® Shadow Blade Snow Plow System is designed specifically for tractor operators. The SHADOW BLADE combined with our signature SNOWSTORM System will literally push a ton of snow. The aggressive angle of the moldboard keeps the snow churning forward minimizing drag on the tractor. Clean large lots and parking areas in less time than it takes a crew running 3 trucks! - Less

The KAGE® Shadow Blade Snow Plow System is designed specifically for tractor operators. The SHADOW BLADE combined with our signature SNOWSTORM System will literally push a ton of snow. The aggressive angle of the moldboard keeps the snow churning forward minimizing drag on the tractor. Clean large lots and parking area... + Read More

The KAGE SHADOW BLADE was designed to increase the efficiency of the snow removal contractor. The SHADOW BLADE is a wing plow that can change direction (go out on either side of the vehicle). Combining this new versatility of a wing plow with the front blade, an operator is sure to find an increase in plowing width and effectiveness in passes. Use the SHADOW BLADE to not only increase the swath width of the front plow, but also to counter-act the crab walk effect when you are plowing heavy snow to one side. The SHADOW BLADE may also be used for bench-winging and plowing back banks of snow that lie along the curb and in ditches.

With the Joystick Control the operate is able to fully control the movement of the SHADOW BLADE. Rather than having additional large joysticks or buttons, KAGE made it easy to operate the main joystick control. Now the operator can focus on the front plow!

The SHADOW BLADE has a ‘fold’ or ‘transport’ function where the blade can be folded in half for easy transportation when moving from site to site. It also beneficial for easy storage. Another benefit of the ‘transport’ function is that the operator will have a clear line of sight behind them while using the front plow.

This is the brains of the machine where all of the signals for movement and hydraulic fluids are run through for flawless performance.

The Shadow Blade is equipped with a floating top link so that the blade can float up and down, following contours of the pavement. Without instantaneous float up and down, the blade would inevitably leave snow behind. With the plow at the ‘normal plowing height’ ensure that your top link is in the middle of it’s float range. There is 5” total of travel. Adjust the turnbuckle until you have approximately 2.5” of thread (float gap) showing at the ‘sliding end’. It is normal that the SHADOW BLADE has a slight pitch downward when it is not resting on the ground. This enables the blade to have ‘float’ when it is down in the plowing position. With the added top link and pivoting cylinders, the SHADOW BLADE has a full floating and oscillating function. This is so that the blade can follow all contours of the ground being a parking lot, ditch, etc.

The Shadow Blade is equipped standard with a hydraulic piston accumulator which cushions blows that the blade will encounter, and also helps maintain curb lines. The accumulator acts as a high pressure gas spring. If you hit a large obstacle with the shadow blade, it will angle backward until it clears the obstacle. If you angle the shadow blade full forward, and continue to hold the joystick, you are filling the accumulator, and essentially overriding it’s effectiveness. When changing the angle in a forward motion, never hold the joystick down longer than you have to.

The locking plunger mechanism is a mechanical lock that prevents inadvertent drop of the shadow blade when it is in the ‘carry’ or stowed position, regardless of hydraulic failure. The hydraulic cylinder has a spring built into the extension function, thereby always pushing the plunger against the bulkhead trying to engage the pin in the slot. Not until the operator activates the rotate function, does the pin retract. When the wing is within +/- 5 degrees of TDC, the pin will engage a ‘holding slot’ in the bulkhead. When the pin is engaged in the slot, the wing cannot fall. Grease the pin with light weight grease every 20 hrs, or twice a year so that it does not seize up.